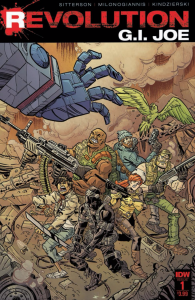 This isn’t exactly something I’m aiming to make a habit out of, in terms of reviewing the comics, but I wanted to check out this new ‘reboot’ of the G.I. Joe comics and figured I’d share some thoughts.
I was big into the comics as a kid. They very much shaped my love for G.I. Joe and the characters. I was a big fan of the reboot a few years ago, too. The biggest standout was the Chuckles storyline.

As the comics got a little too colorful and strayed away from the grounded military thread, I drifted off from reading them. Guessing others did, too.

But IDW (and Hasbro, quite honestly) have been making quite a thing out to this ‘one universe’ concept and their Revolution storyline (the precursor to some elaborate film franchise they’re hoping for, I understand). G.I. Joe, Transformers, a few others, they all share this one universe now.

I may or may not keep reading the new Joe comics, not 100% on that yet, but I will admit the artwork had me a little intrigued. So, I grabbed the first issue.

Right off the bat, I love the artwork. This highly stylized, gritty depiction of the characters (which felt like a grittier version of the G.I. Joe Renegades characterizations) was very cool. Rock’n’Roll, an old time favorite of mine, is especially down and dirty here. Had a real Daryl from The Walking Dead vibe. Also liked Shipwreck, although he’s only in it for a few panels. 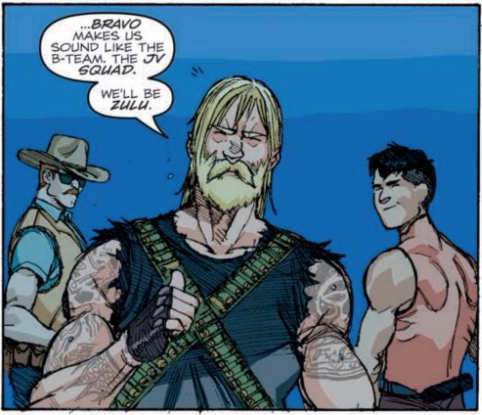 As for the story, I will admit, I was not solid on. Clearly I’m jumping in a little midstream, as the Joes have been apparently fighting the Transformers and such prior to this. There’s also an alien race called the Dire Wraiths, something I’d never heard of but are apparently bodysnatching shape-shifters. Kinda cool, although it was a little bizarre seeing the Joes contend with alien creatures.

The hardcore science fiction story, however, was surprisingly grounded. It follows Scarlett and a handful of Joes (which also included Wild Bill and Quick Kick) on a mission to investigate a base that’s gone dark as they try to retrieve a mystery character who can supposedly help them in their fight against these Dire Wraiths.

I don’t really want to delve into the story points too much, chiefly because I’d be dodging spoilers. But I liked that it was rather dark and gritty. Very fitting with the wonderful artwork. And overall, I liked it, despite any initial misgivings.

There might be something here. Something that may keep me reading for a little while longer. Curious to see how some of this storyline progresses. And as long as they keep the artwork as badass as it is in this first issue, I’ll be very happy.